Elizabeth Davies in her wedding dress
Elizabeth (Bessie) Mary Davies was born on 23 May 1871 in Shrewsbury, Shropshire.2 She was the daughter of Rev. John Davies and Mary A. Jones. Elizabeth (Bessie) Mary Davies married Dr. Daniel Rees M.A., Ph.D., son of John Rees and Anne Davies, on 29 December 1898 in Atcham, Shropshire.3 Elizabeth (Bessie) Mary Davies and her sister were living at Plas Cascrum, New Road, Newtown, Montgomeryshire, in 1939.2 She died on 12 June 1941 in Aberystwyth, Wales, at the age of 70
Mrs. Elizabeth Rees
The death occurred at Aberystwyth recently of Mrs. Elizabeth Mary Rees, widow of Dr. Dan Rees, formerly headmaster of Cardigan Grammar School who, when he retired some ten or twelve years ago, came to Hastings and lived at High Wickham.
Both Dr. and Mrs. Rees had literary tastes and took a great interest in the Borough Museum and Public Library, Dr. Rees being a member of the Museum Association.
Mrs. Rees had been in indifferent health for many years and never recovered from the shock of her husband's sudden death some five years ago. Hastings and St Leonards Observer, June 21, 1941.

F, #6288, b. 11 December 1873, d. 14 November 1947
Pedigree
Florence Emily Davies was born on 11 December 1873 in Shrewsbury, Shropshire.1 She was the daughter of Rev. John Davies and Mary A. Jones. Florence Emily Davies graduated in 1895 from the University of London BA (Hons.)2 Sheappeared in the 1901 census boarding at 24 Coity Road, Oldcastle, South Glamorgan. Her profession was that of teacher.3
"Miss Florence E Davies, B.A., Bridgend, was appointed headmistress of Newtown Girls' School. Miss Davies has for the last three and-a-half years been senior mistress at the Bridgend County School. She was educated at Shrewsbury High School (Girls) and the University College of Wales, Aberystwyth. She had a special course of education London Intermediate B.A. examination, and was an open exhibitioner at the University College, Aberystwyth".4
She and her sister were living at Plas Cascrum, New Road, Newtown, Montgomeryshire, in 1939.1 She died on 14 November 1947 in Newtown, Montgomeryshire, at the age of 73.5

Judge Henry Ebenezer Davies was born on 8 February 1805 in Black Lake, St. Lawrence County, New York.1 He married Rebecca Waldo Tappan, daughter of John Tappan and Sarah Salisbury, on 1 July 1835. Judge Henry Ebenezer Davies died on 17 December 1881 in New York City at the age of 76.1
He was brought up on his father's farm, attended the district school, and when fourteen years old was received into the family of Judge Alfred Conkling as a law student. He was admitted to the bar in 1826 and began the practice of his profession at Buffalo, N.Y., becoming prominent as a lawyer and as a Whig politician. In 1830 he was admitted into partnership with his uncle, Judge Samuel A. Foote, in New York City. In 1848 Judge Foote retired from practice and Davies became associated in partnership with Judge William Kent, son of Chancellor Kent. He was a member of the Common Council of the city in 1840, was elected corporation counsel in 1850, justice of the Supreme Court in 1855 and of the court of appeals in 1859. He was chief justice of the court for two years, his term expiring in 1867, when he declined re-election. He was the friend and confidential adviser of President Fillmore and accompanied him to Europe in 1855. In 1868 with his son, Julian Tappan Davies, he formed a law partnership with Judge Noah Davis which lasted till Davis's election to the supreme bench of the state in 1872, after which Judge Davies continued in active practice with his son until his death. He was counsel and trustee of the Mutual Life Insurance Company, receiver of the Erie Railway in 1861 and a commissioner for the city in the matter of an underground railroad. He was Dean of the law department of the University of the City of New York, 1870-81, and president of the Institution for the Instruction of the Deaf and Dumb. 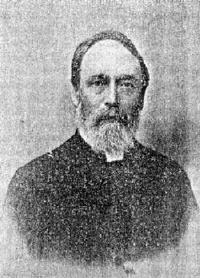 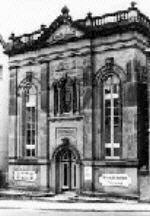 Rev. John Davies. Minister at the Tabernacle Welsh Independent Chapel of Dogpole, Shrewsbury. He was born on 27 June 1831 in Llansamlet, Glamorgan. He was the son of John Davies and Margaret Davies. Rev. John Davies was baptised on 17 July 1831 at Borth Calvinistic Methodist, Llanfihangel Geneu'r Glynn [now Llandre], Cardigan.1 He married Mary A. Jones, daughter of Thomas Jones and Jane (Unknown), on 24 August 1869 in Old Chapel, Llanbrynmair, the service was conducted by the Rev. S. Roberts M.A.2 On 4 April 1881 Rev. John Davies and Mary A. Jones were living in 8 Claremont Bank, Shrewsbury, Shropshire.3 Rev. John Davies died on 3 October 1908 in Oak Villa, Newtown, Montgomeryshire, at the age of 77. In the grant of probate of 13 November to his widow the effects were to the value of £54 5s.4,5


Obituary. The Rev. John Davies, who for over 40 years was pastor of the Welsh Congregational Church at Shrewsbury, has died at Newtown, Montgomery, where he has resided since his retirement from the ministry. He was a native of Llansamlet, Swansea, was educated at the Normal College, Swansea, the Bala Independent College, and the Brecon Memorial College. In 1862 he was ordained to the Congregational ministry as pastor of Sirhowy Church, Tredegar, where he successfully ministered until his removal four years later to become the pastor of the Welsh Church at Shrewsbury, where he laboured until his retirement a few years since. Deceased, who was 77 years of age, had been in feeble health for some time. He leaves a widow and two daughters.- Mrs Rees, wife of Dr. Rees of Cardigan, and Miss Florence Davies, head mistress of the Newtown County School. Welsh Gazette and West Wales Advertiser, 15 October 1908

Death of the Rev. John Davies. - We much regret to announce the death of the Rev. John Davies, which occurred on Saturday morning at Oak Villa, the residence of his daughter. Although he had been for some time in rather feeble health, Mr Davies was able to move about and his kindly face and familiar figure will be greatly missed. On Friday evening he retired without showing any symptoms of serious illness. In fact when taking leave he expressed a wish that all the members of the household would have a good night's rest. At about half-past eight o'clock, however, the following morning he was found dead in his bed. The deceased gentleman, who was 77 years of age, and Mrs Davies, came to Newtown four or five years ago with their daughter, Miss Florence Davies, on the occasion of her appointment as headmistress tho County School. For about 40 years he was Welsh Congregational Minister at Shrewsbury. On Sunday week he assisted at the services in the Welsh Congregational Chapel, Newtown. He leaves a widow and two daughters - Mrs Rees, wife of Dr. Rees, Cardigan, and Miss Florence Davies. The funeral cortege has been fixed to leave the house at 10-30 on Tuesday morning for the railway station, and the remains will be interred at Shrewsbury. The Montgomeryshire Express and Radnor Times, 6 October 1908
__________.6,7

"In the year 1866 a call was given to the Rev. John Davies of Sirhowy, Mon., which was accepted. The recognition services took place in September of that year. The following account of the event appeared in the "Dysgedydd" (Congregationalist) for November 1866:- "On Saturday night, September 29th, Mr. Jones, Wrexham, went through the opening service and sermons by the Revs. S. Edwards, Machynlleth, & W. Ambrose, Portmadoc. On Sunday morning, at 7-30 a prayer meeting was held and at 10 a.m. the Rev. John Davies opened the service, & Messrs. Edwards & Ambrose preached. At 2 o'clock in the afternoon, the Recognition Meeting took place, when addresses were given by the Revs. S. Edwards & J. Jones, Smethcote, and letters of recommendation were read from the church at Sirhowy, and the Monmouthshire Association. Remarks were made about the difficulties of a Welsh minister in an English town by Mr. Edwards. The meetings were encouraging in every respect, and it was pleasing to notice the unanimity in every branch of the church; the congregation is on the increase, more interest taken in the Sunday school, and the church is progressing very favourably.
The Rev. John Davies is a native of Llansamlet, near Swansea. His parents, John & Margaret Davies, were distinguished for their piety, and he was especially indebted to his mother for the good impressions he received in his youth. He was received into church membership when only ten years of age, and commenced to preach when about seventeen. At the end of about twelve months, during which he exercised his talent in preaching on Sundays in the chapels of the neighbourhood, he went in 1855 to the Normal College, Swansea, which was at the time presided over by Dr. Evan Davies, a learned man and excellent schoolmaster. In 1856 he went to Bala College, which was then under the care of the Rev. M.D. Jones. In June 1858 he was received into Brecon College, where he earned for himself a good name as a successful student and an acceptable preacher. He had for his fellow students the late principal E. Herber Evans, D.D. of Bangor College, and Professor D. Rowlands, B.A., of Brecon College. At the end of his course he received a unanimous call from the Congregational church at Sirhowy, Monmouthshire, which was then, as it is now, one of the most influential churches in South Wales. His predecessor was the late Rev. Noah Stephens, afterwards of Liverpool, one of the ablest preachers of the past generation. Here he laboured with diligence until the year 1866, when he received a call from Shrewsbury. Though a Welsh pastorate in an English town is beset with many difficulties and discouragements, owing to the shifting nature of the congregation, and the difficulty of retaining the children, Mr. Davies stuck to his post for more than thirty years. In September 1896 he was compelled to resign on consequence of ill-health, to the great regret of his people, by whom he was greatly beloved. He was presented with a purse of gold on his retirement."

Children of Rev. John Davies and Mary A. Jones

Julien Tappan Davies was born on 25 September 1845 in New York City, New York.1,2 He was the son of Judge Henry Ebenezer Davies and Rebecca Waldo Tappan.1

Dr. John Davila was born in 1869 in Tegucigalpa, Honduras.1 He was the son of Juan C. Davila and Guracid Cuellar.1 Dr. John Davila married Sarah E. Sewall, daughter of Henry Devereux Sewall and Maria Clarkson Holthuysen, on 21 May 1890 at 955 Madison avenue, New York, being the home of the bride's grandfather, Henry F. Sewall.1,2

Agnes Davis was born on 6 November 1899 in Gloucester, Massachusetts.1 She was the daughter of Fred Leland Davis and Mattie Foster Sewall.1

Blanche Davis was born on 24 February 1890 in Gloucester, Massachusetts.1 She was the daughter of Fred Leland Davis and Mattie Foster Sewall.1

Charles H. Davis was born circa 1847 in New Jersey.2 He was the son of Rev. Franklin Davis and Eliza Jane Sewall.1,3

M, #15938, b. 12 January 1863
Pedigree
Charles Thornton Davis was born on 12 January 1863 in Concord, New Hampshire.1,2 He was the son of Dr. Charles Augustine Davis and Mary Parker Thornton.1 Charles Thornton Davis appears on the census of 23 June 1870 his name appears as Charles T. Gardner though ten years later, in the 1880 census his surname is recorded as Davis.1

F, #7737
Pedigree
Elizabeth Davis was the daughter of Solomon Davis and Elizabeth Wendell.1