F, b. 7 December 1903
Pedigree
Moira Beatson was born on 7 December 1903 in India.1 She was the daughter of Gordon Stewart Beatson and Eva Ellen Drummond.1

M, b. 20 July 1890, d. 2 July 1916
Pedigree
Roger Stewart Montrésor Beatson was born on 20 July 1890.1,2 He was the son of Walter William Gordon Beatson and Constance Mary Montrésor.1 Roger Stewart Montrésor Beatson was killed on 2 July 1916 in France at the age of 25 leading his men into action near Fricourt as a lieutenant in 6th Battalion King's Own Yorkshire Light Infantry attached to the 10th Battalion; though the family notice shows him being of the 4th Battalion KOYLI.1,3 He was buried in Gordon Dump Cemetery, Ovillers-la-Boisselle.1 It would appear that he worked for the Canadian Bank of Commerce, since his death is noted in their records. 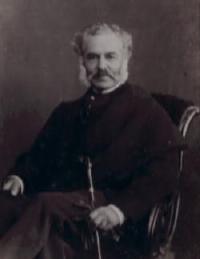 Roger Stewart Beatson
(1812 - 1896)
Maj. Gen. Roger Stewart Beatson R.E. was born on 16 September 1812 in Greenock, Lanarkshire, Scotland.1 He was the son of Capt. Henry Dundas Beatson R.N. and Margaret Stewart.2 Maj. Gen. Roger Stewart Beatson R.E. married firstly Elizabeth Mary Ann Wood, daughter of Lt. General John Sullivan Wood, on 19 November 1836 at Palace Chapel, Valetta, Malta.3 Maj. Gen. Roger Stewart Beatson R.E. married secondly Charlotte Frederica Zébée Gordon, daughter of Maj. Gen. Alexander Gordon R.E. and Zébée Anne Rose Touzi, in 1853. In 1876 in a conveyance the address of Roger Beatson and his wife Charlotte and Z.S. Bell is given as 19 Ashburnham Road, Bedford. Maj. Gen. Roger Stewart Beatson R.E. and Charlotte Frederica Zébée Gordon appear on the census of 1881 living at 57 Bromham Road, Bedford.1 Maj. Gen. Roger Stewart Beatson R.E. died on 2 September 1896 in Rotherwood, Bedford, Bedfordshire, the funeral took place at Bedford Cemetery 7th September.4
He entered the Royal Military Academy Woolwich, early in 1828, and was appointed Second Lieutenant in the Royal Engineers on 29 May 1832. He served in Malta from 1835 to 1839. In the latter year, while still a young Subaltern, he received from the Admiralty the responsible appointment of Director of Engineering and Architectural Works in the Dockyard and other naval establishments at Portsmouth, which he held for six years being then transferred to a similar appointment at Woolwich till its abolition in 1848. He then served in Canada till 1854; and for having rescued at great personal risk, during the destruction by fire of the Parliament House at Quebec, in February of that year, valuable public records, the rescue of which had been unsuccessfully attempted by other gentlemen he received the thanks of the Canadian Legislature. Later in the same year he was appointed Superintending-Engineer of the Ordnance Manufacturing Departments at Woolwich. On 9 November 1855 his promotion from Captain to Lieutenant Colonel was gazetted. He served in New Zealand from 1866 to 1869, during the latter half of that period commanding her Majesty's Forces in the Colony, on return from which he retired on full pay and was promoted to the honourary rank of Major-General.

M, b. 25 August 1785
Pedigree
Thomas Thompson Beatson was born on 25 August 1785 in South Leith.1 He was the son of Henry (Harry) Beatson and Basilea Hamilton.1

M, b. June 1922, d. 27 October 1941
Pedigree
Pilot Officer Walter Gordon Clement Beatson's birth was registered in the quarter ending June 1922 in the Uxbridge registration district.2 He was the son of Major Claude Gordon Beatson R.A.F. and Lilias Mary Ellis.1 Pilot Officer Walter Gordon Clement Beatson was posted missing believed killed in action on 27 October 1941 at the age of 19 whilst serving with the Royal Air Force Volunteer Reserve in 114 Sqdn. His death is commemorated on the Runnymede Memorial, panel 31.1

M, b. 5 August 1897, d. 18 July 1916
Pedigree
Walter William Gordon Beatson was born on 5 August 1897 in London.1 He was the son of Walter William Gordon Beatson and Constance Mary Montrésor. Walter William Gordon Beatson died on 18 July 1916 on Heath Aerodrome, Hounslow, at the age of 18. He is buried in Bedford Cemetery E/4. 84.
TERRIBLE AEROPLANE FATALITY
TWO OFFICERS KILLED.
The manoevers of the aeroplanes stationed the Heath Aerodrome have for a considerable period since the country went to war proved to the public of Hounslow and district a source of much pleasure. Although their presence in the air has become much of a common-place spectacle, the interest taken by young and old in the wonderful machines continues to be as deep as ever it was. Many people who happened to be in the vicinity of the Heath shortly after six o'clock on Tuesday evening were horrified at the sight of one of the aeroplanes tumbling down into a field adjoining the Cemetery in Hanworth road, and on reaching the ground bursting into flames, which soon claimed as their victims two gallant officers of the Royal Flying Corps. Captain Charles D'Arcy Wentworth Reeve, aged 21 years, and Sec. Lieut. Walter William Gordon Beatson, aged 18.
The circumstances surrounding the fatality were related before Mr Reginald Kemp. J.P. (the Coroner for West Middlesex), and a.     jury of which Mr. Smith was foreman, at the Churchroom, Montague-road, on Thursday morning.
Being unable to attend on account of military duties, Capt. Reeve, a brother of the deceased captain, wrote stating that he had identified his brother, and Sec.. Lt. Beatson was identified by Major H Bradley, R.F.C.
Continuing, the Major said the Lieutenant only came to Hounslow the day before the accident, but he had flown before. Captain Reeve was an expert flier, and one of the best in the Corps. He did not witness the occurrence, as he had left the Aerodrome just before, but it was reported to him next morning, and he had held a court of inquiry. What happened was that Capt. Reeve, who was the pilot and instructing Lt. Beatson, banked too steeply and the machine side-slipped.
The Coroner: I suppose it was what we should call an error of judgment? These things do happen, from time to time with the most expert - Witness: It was over-confidence in this case.
In answer to questions, Major Bradley said the machine was only 200 feet from the ground, and Captain Reeve had therefore no time to recover. It crashed to the ground and the officers must have been killed instantaneously by the shock, being burnt afterwards, through the petrol tank bursting and the fluid igniting. Lt. Beatson had his back broken. The machine was perfectly all right before the accident.
The Coroner: In your judgment was it absolutely unavoidable? You know these things are bound to happen from time to time. - Witness: It ought not to have happened. It was over-confidence.
Air-Mechanic Christopher Napper also stated that Capt. Reeve was an expert flier, but that he did not know Lt. Beatson, who went up as a passenger.
The Coroner: Any inexperienced person can do that. I suppose? - Witness: Yes.
He had nothing to do with the controls or anything in that way? - No.
Witness, continuing, said he had had eleven months experience. He tested the machine before the officers flew it and it was in perfect condition. He stood and watched it ascend and after it had been up about five minutes, saw it side-slip, crash to the ground, and burst into flames. It was too low for the pilot to have tried to right it. There was just a slight wind, but nothing to account for the accident. The officers were strapped in. He should think they were dead before the machine caught fire. An ambulance was sent across to them instantly, and they were taken to hospital.
Cpl. Wm. Maple, an engine fitter, of the Royal Flying Corps. deposed to the machine being right in every way when the officers ascended in it, at 6.15 on Tuesday evening. It rose from the Heath in good form, but after two or three turns pitched to the ground and burst into flames.
Dr. Wolf stated that Capt. Reeve was brought into the Military Hospital at 6.30 and was quite dead. It was impossible to say absolutely what the cause of death was, but he should think it was from shock caused by serious burns. If the fire had not broken out the captain might not have died. Lt. Beatson was brought in an hour later, as he believed some difficulty was experienced in getting his body out of the wreckage.
With reference to this Major Bradley, replying to the Coroner, said Capt. Reeve was underneath one of the wings, but Lt. Beatson was below part of the engine.
Dr Wolf, proceeding, stated that in this case also the cause of death was shock from burns. It was impossible to say whether the young fellow’s back was broken, as he was stiff when brought into the hospital. This position did not suggest that his back had been broken.
The Coroner, in summing up, stated that he did not think anybody was to blame, and it seemed a case of the pilot, being over-zealous. One knew how extraordinarily plucky the flying officers were, and it might be that sometimes they got a little bit careless.
The jury decided that the officers died of shock from burns caused accidentally by the aeroplane side-slipping to the ground and catching fire.
P.C. Demer was Coroner's Officer, and Station-Sergeant Taylor represented the Commissioners. The Middlesex Chronicle, 22 July 1916.2

M, b. 9 August 1857, d. 31 December 1908
Pedigree
William John Arnold Beatson. Captain, Royal Artillery.1 He was born on 9 August 1857 in Castletown, Isle of Man.1,2 He was the son of Surgeon General George Stewart Beatson C.B. and Mary Jane Cochrane.1 William John Arnold Beatson died on 31 December 1908 in Marseilles, France, at the age of 51.3
Col. William John Arnold Beatson, who died on Dec. 31 of malaria and heart complications at Marseilles, was the youngest son of the late Surg. Gen. George Stewart Beatson, C.B., and was born on Aug. 9, 1857. He had two brothers in the Army, and another is Sir George Thomas Beatson, K.C.B. Col. Beatson joined the Royal Artillery as a lieutenant in June 1877, and took part in the Afghan campaign of 1880, receiving the medal. He was promoted to captain in 1886, to major in 1895, and to colonel in 1906. In December of the following year he was appointed to the staff at headquarters in India as assistant adjutant-general for Royal Artillery.4

Child of Jane or Joan Beaufort and Sir Edward Stradling

Children of Lady Joan Beaufort and James Stewart, King James I of Scotland

Child of Isabella de Beaumont and Henry of Grosmont, Duke of Lancaster